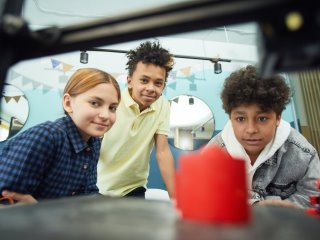 3D printing is a modern manufacturing process that builds objects out of thin layers of material. It is much faster and more affordable than traditional manufacturing methods, and can produce objects in complex shapes. Read on to learn more about 3D printing and its advantages. The following are some steps involved in the process. First, you must create a virtual model of your object. This can be accomplished by using computer-aided design software, or by scanning an existing object. Next, you need to break the model into many thin horizontal layers.

3D printing is a method of making three-dimensional objects by adding thin layers of material and printing on top of each layer. The process involves a digital file that tells the printer where to add each layer of material. The most common type of file is called a G-code file, which contains coordinates that guide the printer’s movements.

3D printing is a popular way to create objects, including toys, jewelry, and many other things. However, it does have some drawbacks. It isn’t always cost-effective and can create unacceptable constraints. For example, most traditional manufacturing processes require the use of expensive tooling and fixtures. They often result in the waste of up to 90% of the material. On the other hand, 3D printing can be more economical than subtractive manufacturing methods.

The process of 3D printing, also known as additive manufacturing, is a process in which thin layers of material are deposited one by one. The principle behind this process can be seen in the development of rock formations deep underground. In these areas, dripping water deposits thin layers of minerals, which form stalagmites and stalactites. Similar to this process, a desktop 3D printer adds material where it is needed, based on a digital file.

FDM, or fused deposition modeling, is the most common form of 3D printing and is often used for plastic prototypes. Another type of 3D printing, SLA, uses ultraviolet light to create complex objects. It can produce a model with intricate detail within hours. DLP, or direct light polymer lithography, is the oldest type of 3D printing.

3D printing methods have many advantages, and can be used to create breakthrough products. They help you unlock creativity, design ideas, and manufacturing technologies. Getting started with 3D printing can be a great way to stay ahead of the competition.

It is faster than traditional manufacturing methods

Traditional manufacturing processes require a large number of machines and processes to produce a single piece. 3D printing is much faster, especially for small and medium-sized objects. In addition, 3D printing can combine the manufacturing and assembly process, allowing you to create customized parts for your products. Another advantage of 3D printing is that it is fully automated, requiring minimal labor. However, because of the nature of the process, 3D printed products may not be as consistent as those produced using traditional manufacturing methods, as the print quality can vary from product to product.

3D printing also cuts out the need for expensive tooling. Traditional manufacturing methods need extensive time to develop and test tools before they can be mass-produced. As a result, it takes 15 to 60 days to make a single piece, whereas 3D printing can create and produce parts on demand in just two or three days. The reduced time to market means that manufacturers are more likely to be ahead of the competition and reap the benefits of a more consistent product line.

Compared to traditional manufacturing, 3D printing is also much cheaper. This is due to the fact that 3D printers do not require production lines and require only an operator to start the machine. The printer then produces whatever design is uploaded into the program. This reduces labour costs while increasing the speed of production.

3D printing also allows for more flexibility in material selection. Many traditional manufacturing methods require molds, which can be costly and time-consuming. With 3D printing, you can produce parts for smaller quantities and even make your own molds. This makes it easy to test designs and improve quality. Furthermore, printing your own goods also gives you greater control over your IP protection.

It can produce complex shapes

The process of 3D printing has evolved to a point were it can create complex shapes. The process of adding layers of materials lend itself to creating a desired shape using a digital 3D model to guide the process.

3D printing has several advantages over traditional manufacturing processes. The process can create organic and complex shapes, including microchannels, and can reduce weight and assembly time. Some manufacturers are finding that 3D printing allows them to create high-quality, durable pieces with no weak joints. A recent example of this is the company Nervous System, which launched a line of ceramic jewelry using this method.

Traditional manufacturing methods often require weeks or months for the final result. However, with 3D printing, it’s possible to produce a variety of shapes in hours. This means that 3D printing can be used to create a one-off concept model, functional prototype, or even small-scale production runs for testing. It definitely helps designers and businesses develop new products faster.

In medical applications, 3D printing can be used to create custom surgical devices and surgical planning tools. The technology is so sophisticated that it can now be used to create entire buildings or houses. For example, the use of 3D printing technology has allowed a team in Moscow, Russia to build a 400 square-foot house in a day and has also helped Habitat for Humanity construct 3D-printed houses.

As the technology improves, many industries have found ways to use it. However, 3D printing still has limitations. It’s not easy to create small-scale products with complex geometries, but the benefits of this technology far outweigh the drawbacks. Fostering 3D manufacturing businesses can be especially advantageous for developing countries to expand their manufacturing base.

Some 3D printer manufacturers have even been succesful at printing food, such as spaghetti and pizza!

It is more affordable

If you’re looking for a better alternative to traditional manufacturing, 3D printing can be more cost-effective than injection molding. The process is cheaper in low-volume quantities. Typically, a part that requires less than 10,000 units will cost less to produce using 3D printing. In addition, the process is environmentally friendly, saving time, money, and fuel.

Another benefit of 3D printing is the lack of human labour needed. The printers perform most of the work required by 3D printing, which reduces the cost of labour and materials. However, a drawback is that the final parts produced may differ slighty from the design, but this can be remedied by post processing. Secondary operations can also be performed to add, or enhance, fine features, or control critical dimentions. Post processing and secondary operations can increase production time and costs.

3D printing has also made prototyping more affordable. A yacht propeller prototype, for example, can be created in a matter of days and costs less than $800, while a traditional boat propeller can take four weeks and cost more than $20,000. Even custom heat-resistant parts can be produced using 3D printing. One company that uses this technology to create its parts is Prumyslova keramika, a manufacturer in Slovakia. It uses an Ultimaker S5 3D Printer to produce mold cores.

Parts can be made, or secondary operations can be performed using CNC machining. While CNC machining is more expensive than 3D printing for producing most parts or components, it is better suited for complete or secondary operations jobs that require high precision. CNC machining can create complex components out of ready materials, but it’s also bulkier and requires a lot of space. 3D printing is cheaper, more accessible, and more environmentally friendly.

With 3D printing, you can use a variety of materials. Plastics are the most common, but 3D printing of metals has also become much more affordable with new 3D printing technologies.

In summary, 3D printing can be used in a variety of applications. Its high-tech features also make it useful for manufacturing, especially for prototyping or low-volume manufacturing. Watch the video below for more information, and get started with 3D printing!