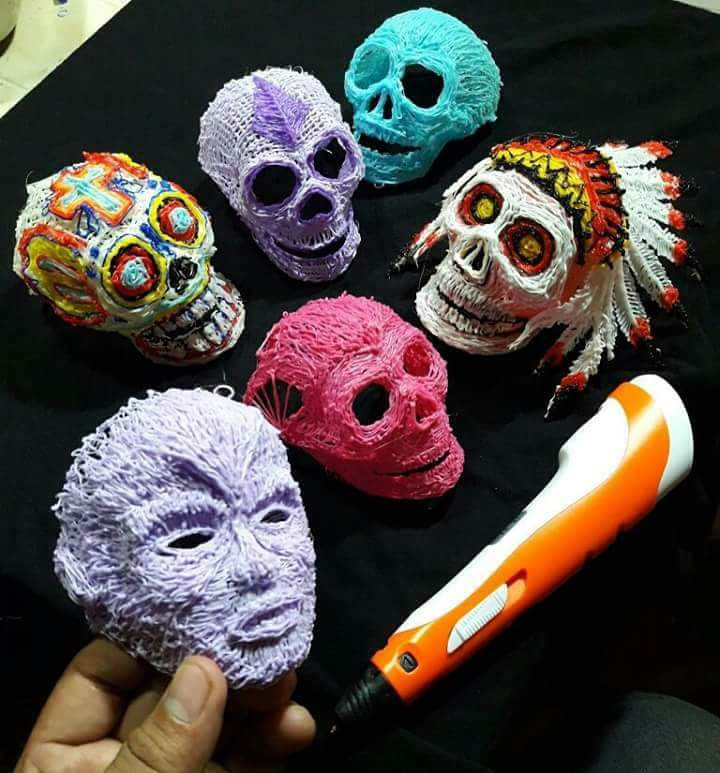 Does the Sinuote Art 3D Printing Pen really let you draw 3D objects? Find out the truth in this detailed review.

ThisÂ Sinuote 3D Pen reviewÂ is going to give you a good idea of how well this product stacks up compared to the other 3D pens available today. Before the review though, a brief recap of what this can do: these pens are like 3D printers in that it allows you to create real, 3D objects. The difference here is instead of printing on a large, expensive machine, the pen lets you draw shapes and objects.

Nice addition to 3D printer – With some practice and steady hand, it can be used to patch 3D prints – let’s say, you were 3D printing something for 10 hours and you need to change some small thing, or you were installing a knurled nut and messed it up a bit. This little thing will save you 10 hours of re-printing. You need to bump temperature a bit to patch existing prints, because you need to re-melt it to stick. Great value for the price!

This 3D printing pen works similarly to a 3D printer: it uses molten plastic as the ink or medium. As you draw, theÂ plastic polymerÂ in the pen emerges as a colored ribbon. What makes the pen work is the ribbon adheres on plastic surfaces that are similar to it, and then it solidifies. Because the pen is easy to use and learn, it’s ideal for hobbyists and 3D artists.

What are the Features?

This 3D printer pen looks like a typical pen but it has some very useful and unique features that make 3D designing easy. For starters, the pen uses low melt plastic polymer. The polymer used in the pen is polyethylene and has a significantly lower melting point than other materials, so when you use the device a bit of heat is generated to melt the plastic.

One of the things that set the Sinuote apart from the rest is you can use rechargeable batteries or a power supply so it’s even more flexible than before. And if you look at the top of the pen you’ll see the opening where the colored filament is stored. From there the filament is pulled in and set in a container inside the pen where it’s kept in a melted condition. As you draw, this substance is released.

Different types of colored filaments are available including turquoise, pink, black, white, red, orange, purple, blue, and green. Putting these colored filaments to work isn’t hard and is one of the highlights of the pen actually.

Even if you haven’t used these devices before, figuring out how they work isn’t going to be a problem. There’s a single button to turn the device on and off and another one that lets you manage the plastic filament flow. You’ll also see two LED indicator lights that will let you know if the pen is drawing the filament, when you can use it and when it is on standby. The standby function is automated so you don’t need to tinker with it.

A typicalÂ 3D printerÂ is bulky and once in place cannot be relocated without difficulty. This pen, however, is light and robust. You can spend a lot of time drawing 3D objects and your hand won’t get tired. This alone makes the pen worth a look because drawing 3D objects take time and patience. If you’re going to add a lot of details and surface features, you’re going to want a pen that is comfortable, and the Sinuote delivers in this regard.

The limited number of controls works to the pens advantage as you can just concentrate on drawing and less on messing around with the setting. The pen does require some time to reload, but the wait isn’t that long and its actually a good thing since you’ll have the opportunity to go over your work. The amount of time it takes to learn the device isn’t long and you’ll be whipping out 3D art soon enough.

Overall the device is easy to use and the controls are responsive. Because the pen has become popular you won’t be lacking in guides online, but even without them, you can get started with little trouble. With a regular pen, you press the tip on paper, but with this, you just turn it on and draw in the air. It may feel odd at first but it’s something you will get used to, and it’s hard to explain the feeling when you see a 3D object you drew come alive piece by piece. The standby function works well here so it only kicks in when you’re not using the pen, and it won’t get in the way.

The default settings should suit most users, and the first time you use them the focus will be on getting a good grip on the flow. If the default speed isn’t to your liking you can adjust the bleed rate. This is one of the cooler features of the pen and comes in handy when you’re experimenting with different colors and shapes. If you want to use a specific color just run at the normal speed, but if you want to try a different color you can increase the speed to use the filament up.

The reverse and forward feed controls are properly spaced, and the buttons have been placed in such a way that when you hold the device like a regular pen, your finger won’t accidentally press the wrong button. Bottom line: when you use this pen to draw, you can focus on the drawing and nothing else. That’s what these are supposed to do and in that instance, it succeeds.

There are a lot of features going on for this pen.

As good as the pen is it isn’t without flaws:

The Sinuote Art 3D PenÂ is a great example of how new technology is supposed to work. There’s still room for improvement, but it does what it’s supposed to do, and that’s draw 3D well. The pen is light, reliable, and the various options allow you to create objects the way you want to. This is going to take some getting used to, but it beats a 3D printer that can cost thousands of dollars.